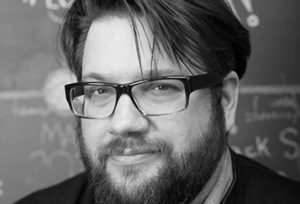 “I’ve had the wonderful pleasure of knowing and working with Mack McKelvey for more than a decade. Even though she’s a Cowboys fan, she’s a trusted friend and a brilliant marketing mind, and it’s no surprise the organization she’s built at SalientMG consistently does amazing work for their clients.”

Brendan Lewis is a veteran communications executive with more than 20 years driving corporate communications strategy and programs for disruptive technology companies. He has vast experience leading both public and private companies through mergers and acquisitions, funding, high growth, global expansions, and market shifts.

Today, Brendan is the Vice President, Communications at Gruhub. the nation’s leading online and mobile food ordering company dedicated to connecting hungry diners with local takeout restaurants. He utilizes more than two decades of traditional and digital integrated marketing communications experience to drive market favorability for the company with all the relevant constituencies.

Brendan served as the vice president of communications at startup catalyst, Expa, before joining Grubhub in early 2018. At Expa, he led strategy and communications for Expa, the company’s partners and its Studio and Labs companies.

Before joining Expa, Brendan was a partner at The Pramana Collective, where he helped grow the firm’s marketing and communication business in New York. Previously, he was the Global Head of Communications for Shazam, a popular music app, and head of communications for Foursquare, developing and leading the external communications efforts through three rounds of funding, four new product launches and the introduction of several lines of monetization.

Prior to Foursquare, Brendan worked at daily-deal provider LivingSocial, handling domestic and international business communications. During his career, Brendan has worked in-house and agency side for Juniper Networks, VeriSign, 463 Communications, and Edelman. He began his career in the public education department of The Eye-Bank for Sight Restoration, the world’s first transplantation organization.

Brendan holds a B.A. in sociology from the University of Maryland, College Park. Though born in Virginia, he considers himself a proud New Jersey native. Brendan currently lives in Westchester County, NY with his wife, two daughters and a Carol Channing ventriloquist dummy that he spent nearly $400 on for some inexplicable reason.