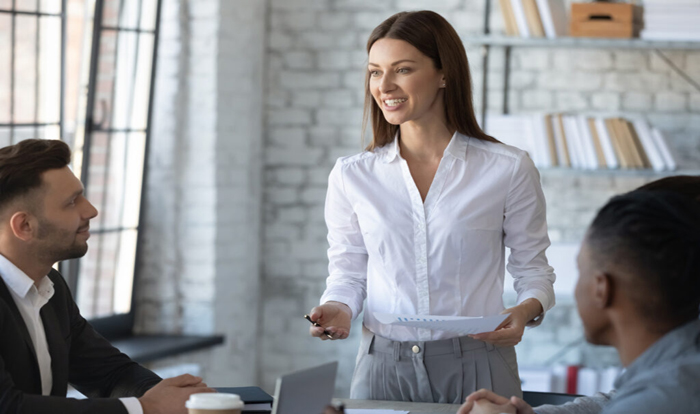 Most people assume that thought leadership is just for senior executives. But it can be a helpful tool for those rising through the ranks of management. An increasing number of mid-career executives are now using thought leadership as a way to position themselves well within an industry, locate and participate in an elevated peer group, and transcend expectations in order to really succeed.

Here are a couple of (fictional/illustrative) examples:

Elyot and Mallory both joined a major consulting firm straight out of business school. A decade later, their lives have gone in very different directions, although they’re still part of the same alumni listservs and meet ups. At a recent reunion they spent a lot of time talking to catch up because both were largely absent online.

In Elyot’s case it was start-up related exhaustion that kept him offline. His only real digital participation outside of work was with his cycling buddies, and that was purely data to compete on miles. For Mallory, it was prudence due to conservative client-facing consulting roles. Online harassment had sent her behind password-protected accounts to stay in touch with family and select friends.

Mallory confided she’d just returned from an assignment in Hong Kong where her Chinese colleagues told her they’d been unable to gauge her “level of influence” because there was little online apart from her LinkedIn profile and company team bio page. They told her about the concept of “Guanxi,”the fundamental power dynamic in personalized social networks. Without a strong digital presence they’d not been able to locate her position as a node within the network.

Elyot said he’d reached the same conclusion as Mallory. Neither of them would get where they wanted to go without a seriously impressive digital presence which accurately reflected their industry-facing views and expertise. For Elyot it was proving hard to raise capital without it; potential investors and board members had told him it was imperative if he wanted his business to succeed.

Luckily, there were several classmates at the reunion who said they were working with writers and consultants to build a definitive thought leadership platform. Mallory and Elyot took down the details and said they’d serve as each other’s “action buddy” to make sure they followed through.

Nearly 12 months on, due to their thought leadership platforms, strategic support, and a lot of  hard work, Elyot’s start-up is in great shape, while Mallory was just made EVP. They are staying in touch to keep each other accountable. It’s not been easy making time in their busy schedules to collaborate with a writer on monthly assignments, but it’s made all the difference.

Mallory has been publishing industry-facing articles in Forbes and Newsweek on a monthly basis. It took a while to gain momentum but, when a top CEO read Mallory’s last piece [“Artificial Intelligence as a Consulting Partner”], she approached the consulting firm and signed a major contract around restructuring her own business. Mallory’s articles also led to her speaking at a major conference – on the main stage – and taking a leading role within an industry networking organization.

This aspect has proved most rewarding. Her rise in profile has elevated her to a whole new peer group. By demonstrating her prowess within her field, and getting her name out there, Mallory feels part of a much more successful crowd – and it’s helping propel her to the top.

In the meantime, Elyot has found his own thought leadership platform really moved the needle on his business. Due to his pieces in major technology and business brands, VCs knew who Elyot was before he walked in the door. He also connected with several high-profile mentors who responded to his work privately – and then on social media, raising his public profile enormously. One of them was so impressed by Elyot’s innovative take on industry changes that he not only invested capital, but is guiding him towards a phenomenal exit too.

Like Mallory, Elyot’s thought leadership articles have raised him to a new level within his peer group. He’s still competing on cycling miles – but the cyclists on his Sunday rides are now major Founders and CEOs.

Elyot originally left consulting because he wanted to explore new projects and ideas on his own terms. He knew that entrepreneurship would be a full-on challenge, but looked forward to having more control over his time to focus on his personal passion areas. A few strategically-placed articles have given him much more exposure than he’d expected. He’s found that thought leadership has helped cut through a lot of the slog of building a reputation.

Mallory has also reaped the benefit of developing a public self – especially one that transcends the limiting expectations usually faced by BIPOC. By getting her great ideas out there – ahead of her physical presence – she’s found it helps in combating others’ hidden biases. By admiring her intellect first, and appreciating her skill in forging new frontiers of thought, people who (previously) would have overlooked her are forced to confront their own prejudices.

While Elyot has found a way to “manage” his image without engaging a publicist (yet), Mallory has found that her thought leadership efforts have given her increased industry visibility and credibility, allowing her to re-position herself within her firm and advocate for increased responsibility on her path to executive leadership.

This post is the third in a series about the value proposition of executive thought leadership. Be sure to read the other posts in the series:

Ready To Get Started?
Comments are closed.